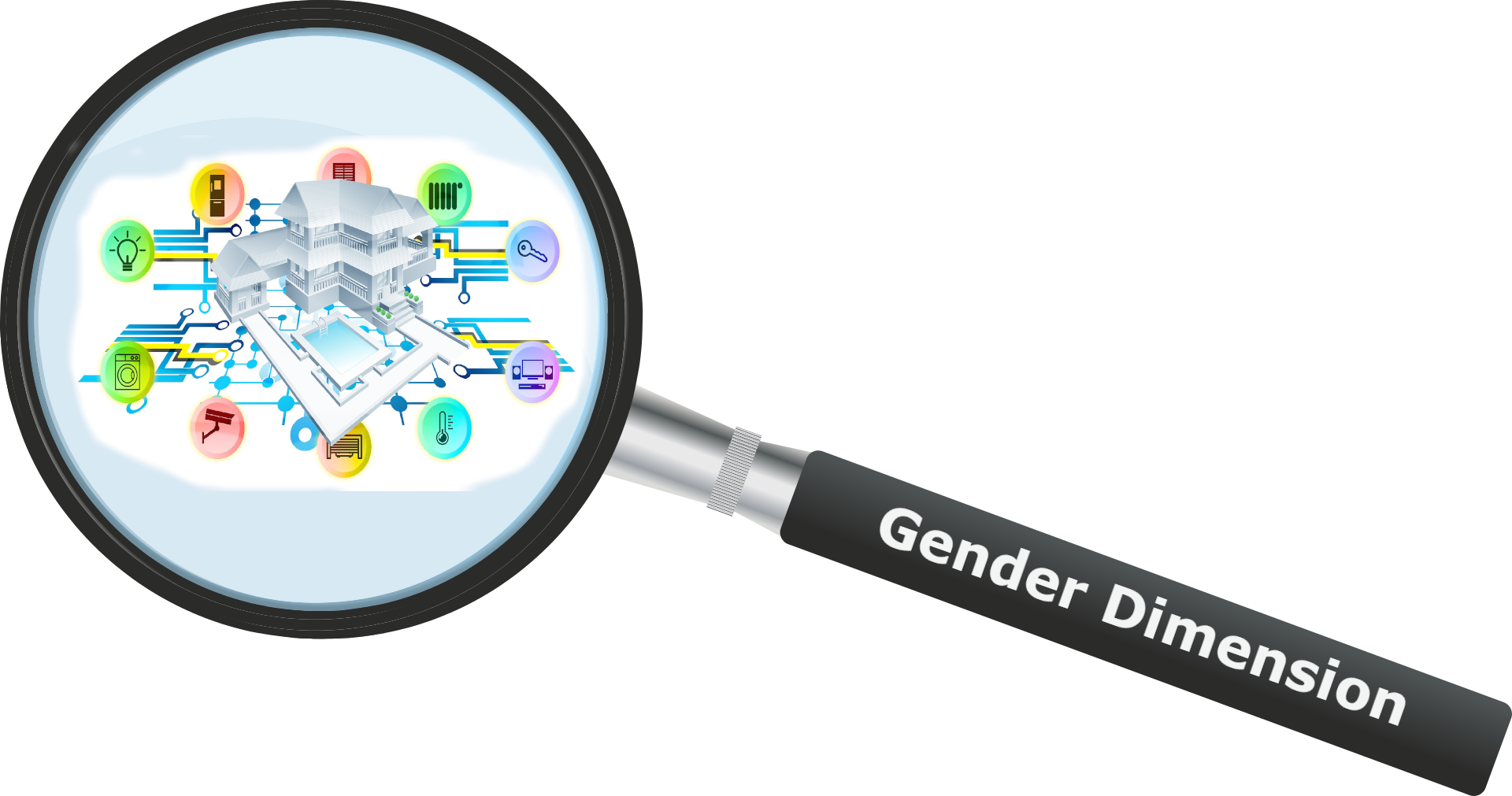 Since 2015, there has been a 20-30% increase in user interests in countries such as Germany and Unites States of America [4,20]. In addition, the global smart home market is expected to reach an estimated $107.4 billion by 2023 [9]. As research over the years shows, the smart home industry is here to stay but still grappling with the challenge of mass-scale realisation [5]. The current challenge of mass-scale realisation and sales growth has been made more difficult to achieve by industry and academic research failing to incorporate the concept of the household as a complexity of relationships in design and development but rather advancing the concept of a smart home as a sterile place, neutral and bland [13]. The current focus places the household on a backbench, with design and development concentrating on a new kind of smart household ignoring the current intricacies such as the individual member roles of the household. The design and development of smart homes should seek to answer questions of how smart home technologies can merge and flow seamlessly or efficiently domesticated into existing household structures. Therefore different dimensions of research, specifically the gender dimension research into the ever-changing notions of family and households to boost mass-scale user adoption, is required.

What is a gender dimension?

Gender dimension acknowledges that potential gender differences exist and seeks to accommodate these differences in innovation.

What is gender dimension and how relevant is it to smart home innovation today? Gender dimension refers to the integration of sex and gender analysis into research and innovation [14]. It means more than collecting statistical data on the number of males or females in a study sample population, it drives research and is not an add-on. It involves the querying of gender norms and stereotypes, a reconsideration of standards and reference models leading to a deeper understanding of gender needs, behaviours and attitudes. Most importantly, it enhances the societal relevance of the knowledge, technologies and innovations produced and contributes to the production of goods and services better suited to potential markets [14]. Gender dimension acknowledges that potential gender differences exist and seeks to accommodate these differences in innovation. In the field of computing, especially in game development, most games end up marketed and sold to males ignoring females as a potential market [15]. The gender dimension in innovation means researching into male and female game interests, designing and developing with the gender interests in focus. Another example of the need for gender dimension in research is the Pregnancy Crash Test Dummies which allows for the testing of car seat belts with ‘pregnant-looking’ crash test dummies to avoid foetal deaths, which is most rampant with conventional seat belts [16].

The home is still a gendered place

The consideration of the gender dimension in smart home research will allow a new outlook on the different preferences and needs of gender in a home.

In understanding why smart home innovation must be relooked at again through the gender dimension lens we must keep in mind that the home remains one of the most gendered spheres of society in most cultures [17] with most of what people do within a household being culturally determined by gender [11]. And in western countries, there is a significant gender division within the modern family home [11] with women still taking on the higher percentage and spending much more time on household chores as compared to males [10]. For example, Tjørring et al. in their study on saving electricity in the home believe the correct strategy is to address the woman in the household as she is normally solely or partially responsible for using the relevant energy-consuming appliances [17]. Smart home innovation must concentrate on what is happening now in the home, who does what in the home and how these users’ interests can be addressed. The consideration of the gender dimension in smart home research will allow a new outlook on the different preferences and needs of gender in a home. The home has different connotations to men and women and thus a consideration of potential (e.g. behavioural) sex-gender differences in innovation avoids the delivery of stereotype-driven products. It is thus in order that the gender advisory group for the EU Research and Innovation Programme Horizon 2020 advises that adding on the gender dimension in Smart Home innovation might be the answer to uncapping the potentials of energy efficiency from smart homes [8].

In the following paragraphs, I will discuss some user-identified barriers that hinder smart home innovation [2,3,5].  I limit my discussion to the thematic areas of privacy & security and cost & knowledge, and in discussing these concerns I seek to bring to light why gender dimension in smart home innovation is necessary in addressing these barriers.

Smart home devices can be digital tools of abuse

How can the design and development of smart home innovations empower women at home to protect themselves from violence?

Domestic violence is the most common form of violence that happens globally against women. One out of three women in the world has been beaten, coerced into sex, or otherwise abused in her lifetime and the abuser is usually a family member or someone otherwise known to her [18]. Violence against women occurs predominantly behind closed doors at home with most cases having never been reported to police [6]. How can the design and development of smart home innovations empower women at home to protect themselves from violence? Even in its current market-infiltration stage, there are recurring reports of smart home devices being used to facilitate domestic violence, smart home devices are being labelled as new digital tools of abuse [12]. Smart home devices are being used by abusers to stalk victims, give them a sense of insecurity in their homes, make them feel they are crazy or monitor victims’ activities at home. The concerns of privacy and security in the home can range from harmless deeds to life threatening issues. Smart homes should provide occupants with an assured sense of security. That sense of the home as a haven and comfort zone should as well be found in a smart home. As privacy and security concerns differ for each member of a household, it is necessary that levels of privacy are defined and guaranteed. Enabling gender and sex analysis to lead smart home innovation will bring these issues to fore. Participatory design sessions with members of households will allow designers and developers to identify these concerns, factoring them into design. As much it is important for industry to gain a mass scale of market adopters, it is equally if not highly important that individual privacy concerns and security levels should be inputs in design to avoid life-threatening problems.

The use of technological innovations to facilitate societal division and exclusion has often been criticised by several researchers. Balta-Ozkan et. al highlight the current exclusivity of smart homes for tenants and those on low incomes as well as users with low technological know-how [2]. With smart homes marketing imagery often showing young to middle-aged white couples often with a single young child [5] and often middle class, it fails to reflect the varying notion of a family. Or perhaps is this marketing imagery the means in defining who is included or excluded from owning a smart home? How are the varying economic situations of users taken into consideration in smart home innovation? Will smart home innovation only facilitate social exclusion for certain groups? Industry often tends to concentrate on wealthy and well-educated male users who can afford such homes and often stereotyped to be ‘tech-savvy’, however there exists other users who can be socially isolated due to the inability to afford smart home devices or assume they are meant for the ‘tech-savvy’. In the EU, the largest age group are the baby boomers (40-50 years old) who will within the next 20 years go into retirement [7]. Women remain the least earning members of the workforce and have highest number of unemployment rates. In addition, women tend to live on the average 4 years longer than men. A consideration of these factors brings to fore a new potential market that will need the most affordable forms of smart home devices enabling these women to live independently as required. An additional example would be that of the growing number of single-parent households who often are more vulnerable to poverty and marginalisation [7]. This is another new potential market that would need smart home innovation to support their parental roles yet be extremely affordable. The subject of how much ‘tech-savvy’ one must be to use technology can as well deter users from technology use, especially for age groups that have not required such technology till now. Nevertheless, in performing participatory design sessions with these users, user-inspired simple-to-use interfaces and devices can be designed that require little or no special training to use. And as these are user-driven, the possibility of acceptance is very high.

The need for gender dimension in smart home innovation

It is necessary that all users of the household are considered in the design of smart homes with design and development stripped of stereotyping.

An integration of sex and gender analysis into smart home innovation will aid in incorporating the varying concepts of homes, member roles, the makeup of a household into smart home design and development. The identification of possible gender differences in society and in the concept of a home does not only create new potential markets, it additionally meets the satisfaction of specific user needs. In this article, I have discussed the need, with examples, to look carefully at smart home innovation through the gender dimension lens. The concept of privacy is as unique as every user with privacy concerns in a home differing with each member of the household. It is necessary that all users of the household are considered in the design of smart homes with design and development stripped of stereotyping. The consideration of factors such as economic income based on gender can as well be beneficial in avoiding marginalisation or social exclusion. This would allow smart homes to be available to all regardless of their economic situation. I conclude by battering the stand that the home should not be separated as a bland entity in need of technology add-ons but using the gender dimension, the intricacies of the home and its’ members are researched and used as the foundation for design and development of smart home Innovations.

[1] Agnete Alsos, Gry, Elisabet Ljunggren, and Ulla Hytti. Gender and innovation: state of the art and a research agenda. International Journal of Gender and Entrepreneurship 5, no. 3 (2013): 236-256.

[8] For a better integration of the gender dimension in the Horizon 2020 Work Programme 2018-2020 Position Paper Advisory Group for Gender. December 2016.

[19] Wilson, Charlie, Tom Hargreaves, and Richard Hauxwell-Baldwin. Smart homes and their users: a systematic analysis and key challenges. Personal and Ubiquitous Computing 19, no. 2 (2015): 463-476.